I was more than a little nervous when Little, Brown invited me to write a new novel inspired by Mr. Popper’s Penguins. At first I thought my nerves were performance anxiety. The 1938 original won a Newbery honor and is still devoured by kids across America. I read and adored it as a kid. What if I waltzed in with a crummy Popper book? What if I wound up writing Grease 2: Penguin Edition?

I was doing one of my early re-reads of the original when it struck me that my nerves were from more than performance anxiety. Our culture has come a long way since 1938. There are many aspects of Mr. Popper’s Penguins that feel wonderfully progressive, and others that feel like artifacts of their time. What was I going to do about tweaking those, without still honoring a classic?

Some modifications would be easier than others. Children’s literature used to choose soothing adult presences for its main characters, which is very much not its current mode. Easy enough to fix—I already had two kids in mind for my main characters. Other aspects were trickier. Mr. Popper is filled with the spirit of adventure, but his wife wants everyone out of the house so she can vacuum in peace. Tough messaging about gender roles for modern kids. The biggest hurdle, though, was the ending of the original, when Mr. Popper decides to bring his penguins up to the Arctic, where there are no penguins—that way they could have it all to themselves! I’m sure it felt like a wonderful resolution in the 1930s, but now of course it flies against all conservation principles. You can’t just bring an invasive species into the Arctic!

Sometimes we writers of children’s books are writing about the world as it is, but often we’re writing about the world as it could be. That was what finally liberated me of my nerves around Mr. Popper’s Penguins. The Atwaters weren’t saying “here is our world,” but “here is what we desire for our world.” Their book is a product of its time, sure, but it’s also wildly forward-thinking. The natural world comes crashing into the Poppers’ drab lives, and during the resulting adventure the town of Stillwater—and eventually the whole country—comes to cherish wildlife. Though the particulars of that adventure have some trappings of the 1930s, the spirit of the story is timeless.

In The Popper Penguin Rescue, a girl and a boy move into a house near Stillwater and discover that two penguin eggs have been left behind. They bring the eggs to school, where they hatch at the most inconvenient times. They try to hide the two chicks from their mother, and of course they’re found out… but their mother surprises them by agreeing to bring the two chicks up to the Arctic to live with the famous Popper penguins. This felt like a decent way to honor the joy and hopefulness of the original, while making a few updates: kids at the center of the action and female characters with agency.

I still had the riddle of what to do about the original book’s invasive species ending, though! I figured out a solution by—stick with me here—turning to love. What comes through so strong in Mr. Popper’s Penguins is the adoration Mr. Popper has for those birds. He’ll sacrifice anything and go anywhere to do what’s right by them. Once the kids in my book get to the Arctic, they find that the native puffins are starving, because the Popper penguins have been outcompeting them for food. They do just what Mr. Popper would have done, if he’d seen that happening: they move heaven and Earth to get the penguins where they belong: the Antarctic. Their original home.

Those values—respect for the natural world, making personal sacrifices to do right by those who rely on you, finding adventure and joy even in fraught situations—were there loud and clear in the original novel. They haven’t aged one bit. No updates required. 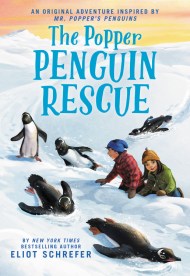 It's been years and years since the Popper family lived in Stillwater, but the town is still riding high on its former penguin residents. Across the river, in Hillport, residents try to re-create the magic with penguin carnival rides and penguin petting zoos, pretending they're the Popper originals. As the years have gone by, fewer and fewer people have come, and the small attractions shuttered.

Nina and Joe Popper have just moved to Hillport with their mother. There's a lot to do: unpacking, scrubbing the floors, investigating the basement-wait, what's this? Two penguin eggs are tucked snugly near the furnace!

It's up to Nina and Joe to find their newly hatched penguin chicks a home. Setting off on the adventure of a lifetime, they endure perilous storms, a long journey to the Arctic, and of course, penguins. Lots and lots of Popper penguins!